I’d spent a month wandering and eating royally when I arrived on La Gomera in mid October. I’d eaten moules in France, game pie and pulled pork in London, Cumberland sausage in the English Lake District, and fresh seafood, fish and lamb in Ireland, and capped it off by scoffing the season’s first spiced pumpkin latte in Dublin airport. Safe to say I was stuffed, and not at all fazed by the prospect of living for a few months on a small island where I expected plain, sturdy country food.

Certainly, my expectations have been met. In Hermigua there is no Chinese restaurant, no pizzeria and definitely no sushi. There are excellent, traditional foods, cheeses to-die-for, meat and chickpea stews, palm honey and almogrote (more about those soon), and all the traditional Spanish and Canarian tapas, plus, I recently discovered in this chilly winter, watercress soup,  but my first eating experience was not what I’d expected.

On my second day, I wandered down to the tasca owned by the family whose apartment I am renting, and ordered a tapa of mushrooms. I expected what is usual in the Canary Islands, a small dish, reeking of garlic, in which mushrooms float in a sea of oil. It’s a greasy dish (albeit olive oil, so not as bad as it sounds), which you have to be in the mood for. However, what I got was a generous plate of sliced mushrooms, fanned out, and definitely not resting in grease. They were fresh and garlicky with an aromatic touch of cilantro, and each mouthful was sheer delight. I realized with both alarm (I’d planned on “dieting” whilst here!), and satisfaction, that I wasn’t going to be on a diet of cheese and chickpeas in Hermigua.

In fact, sitting there on the outside terrace, in Tasca Telémaco, sunlight filtering through the bamboo shade, listening to the faint sounds of cocks crowing and goats’ bells along the valley,  it seemed like such a natural extension of the good life I’d been living that I’m pretty sure that I slipped into the sort of trance enjoyed by the lotus eaters.

Since then, Tasca Telémaco has become my favorite place to eat, and not just because the owners have become friends. And the trance, the connection to my favorite poet? That’s the oddity here. Telémaco is the Spanish way of saying Telemachus, son of Ulysses. This is its story:

To understand it, you have to know a little about Canarian history, not the history of the noble aborigines who lived here before the conquest, nor the stories of the battles that make up almost a hundred years of the archipelago’s history, until the last island to succumb, Tenerife, fell in 1496, but the history of what happened after the Conquest. This is the story of the land, and the folk who farmed it.

Fertile as La Gomera was, with its rich, volcanic soil and temperate climate, it can’t have been easy creating the agricultural society that began after the Conquest. The island is steep, a series of volcanoes thrust from the ocean bed millions of years ago; driving around it, you climb up hillsides, go through mountain tunnels, descend steeply into the next valley. Many of these mountainsides are terraced, and most have been abandoned. Despite the rich soils and the nigh-perfect climate, working the land here wasn’t easy. 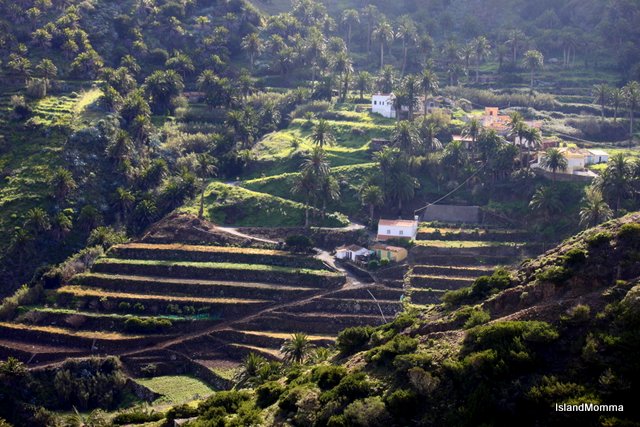 Agricultural terraces around the hillsides of Alojera

There are similar stories in all the islands, although perhaps this appertains more so to La Gomera. Having migrated here with, or in the years following, the Conquest, Canarians were often driven to move on, sometimes because of the difficulties in making a living from the land, sometimes because of the feudal landlord system, which lasted well into the 20th century. The history of the islands is, thus, a history of immigration and emigration, which possibly accounts for their tolerance of modern immigration. (Please don’t come back with stories of intolerance here, they exist everywhere. Overall the level of tolerance is high.)

Most emigrants drifted west, particularly those who lived in the western islands, which now form the province of Santa Cruz de Tenerife, namely Tenerife, La Gomera, La Palma and El Hierro. Canarian immigrants founded the town of San Antonio in Texas, and there is also a significant connection with Louisiana in the US. However, generally, they wandered further south, all over Central and South America, but mainly to Venezuela (hence the huge preoccupation now in Canarian media with the problems there), and Cuba.

In 1950 a boat filled with hopeful emigrants left the shores of La Gomera. It left clandestinely, because such emigration was illegal. When it reached Venezuela, where immigration was becoming problematical, the occupants were held on a small island offshore, until their fate was decided by the powers-that-were, but eventually most of the adventurers stayed in the country for a time at least. Writing, I realize that the story of Telémaco, as the boat was named, needs more telling, so I’ll keep that for a future post.

For now let me explain that aboard that boat was a hopeful young man, who was the uncle of Tasca Telémaco’s present owner, Rochi.  He remained in Venezuela until the 1980s, when he returned to his “sunlit island in the sea,” ** and opened a bar, which he named for the boat which had taken him to seek his fortune. 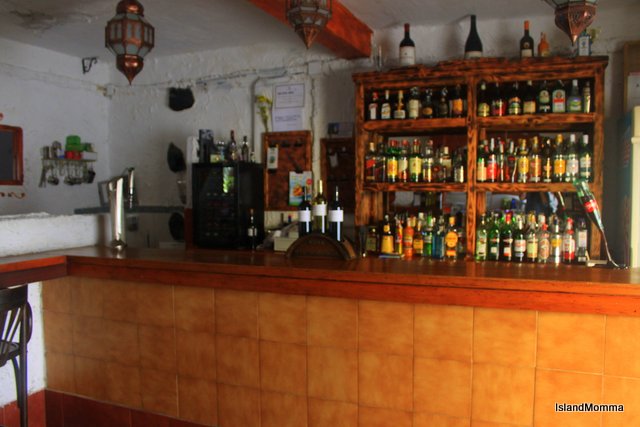 That bar passed to his niece, Rochi, some three years ago, and she has extended it, and created a chill out bar, which is the hub of Hermigua’s nightlife. Situated on the short street running right from the church square, it occupies a delightful position, its outdoor terraces open to views over the terraces of the surrounding valley.  On Saturday evenings there are salsa classes…..which, I have decided, is likely not for me, but that is nothing to do with the standard nor the fun of them! During my weeks here I’ve been to a very professionally presented fashion show, a Halloween night, an unforgettable New Year dinner, and a marvellous performance by a local folk music group, and missed countless other events (memorably just last night, when there was rock ‘n’ roll, and I discovered that I’d lost the money I had in my pocket for the night). Stepping out the door afterwards, it’s to a deserted village, with just a few good old boys hanging around a roadside bar.

Just one of the dining areas in Tasca Telémaco

Outdoor bar – such great atmosphere here on a balmy evening 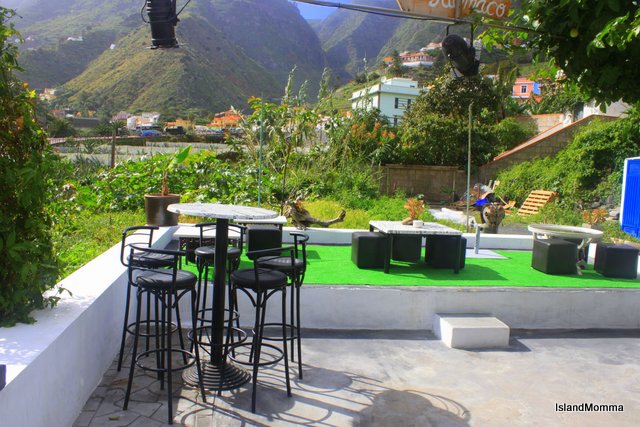 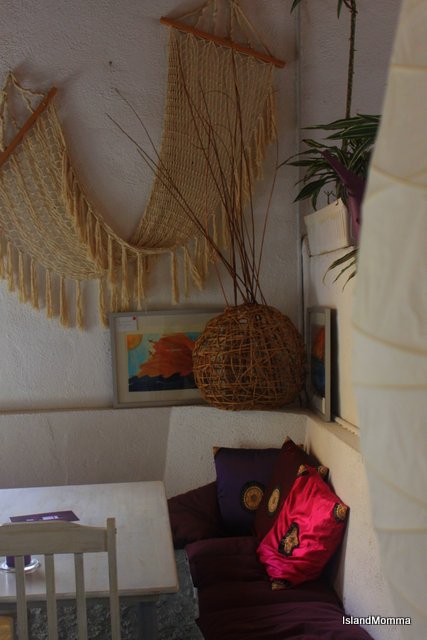 Colorful nook inside the tasca, which is made up of delightful nooks and crannies like this

But to concentrate on entertainment is not to do justice to Rochi’s food. She has lived around the world, and brought ideas to the dishes she has created for the tasca, whilst featuring Canarian dishes, and sourcing fresh, local ingredients.

Now, almost at the end of my stay here, I can reveal that I have pretty much made my way through the entire menu, and I can pronounce my favorites. Perhaps because I know I won’t get them outside of the islands, they are Gomeran specialities: top is a dish heaped with lightly fried aubergine drizzled with palm honey. It comes with whatever fruit is fresh and available, sometimes mango, sometimes banana. Second is almogrote, a cheese paté, spread over sweet potatoes, and dressed with whatever salad is available. Here is where I have to refrain from droning on about the Thai pancakes or the croquettes, or the tuna in mojo, but I will mention the passion fruit mousse, which is so good, that going with a friend one evening, we not only had one each (as opposed to sharing dessert in modern girly fashion) but ordered a third one to share!

Add to the great food and delightful ambience the really friendly service from guys  who are constantly whirling around with plates of food and drinks, and……drum roll…. free wifi, what more could I have wanted? I’ve spent far more afternoons at Tasca Telémaco’s tables, one hand on my keyboard, the other stuffing my face, than I have whiled away evenings in fact. 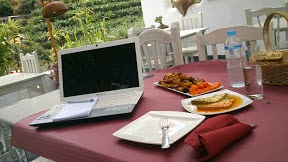 Before I leave La Gomera I will probably do a post about the other various places whose food I’ve enjoyed, but without exception, none have matched Rochi’s flair, that distinct touch of the original. I’ve had some really excellent, local dishes, and at the beginning I was very aware that spending a few months here would probably mean lack of variety, so it’s no real surprise that my favorite eatery has turned out to be the place which brings some imagination to local produce, accustomed as I’ve been for years now to have a wide choice of cuisines within easy reach.

If I felt so inclined I might lay the blame for my extended stay at Tasca Telémaco’s door in fact!

** “Sunlit mountain in the sea** is a quote from Bruce Chatwin’s “In Patagonia” When he meets a Canary Islander, dreaming of his home across the ocean.

Aging with passion; travelling with curiosity; exploring islandlife, and trying to keep fit and healthy.

5 thoughts on “Tasca Telémaco: A Story of Wanderings and Food”