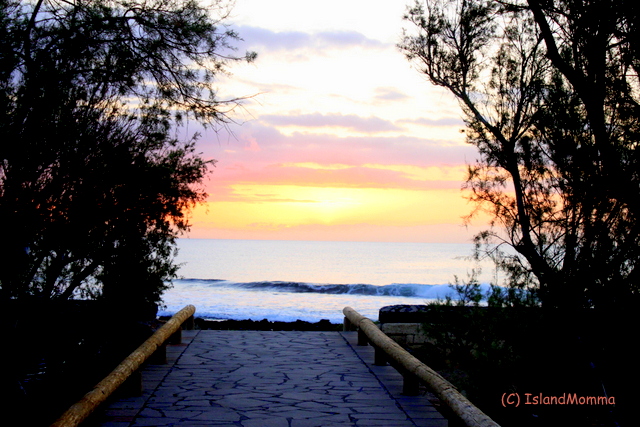 I love the smell of dawn on the Tenerife coast. The air bears scents you don’t smell during day nor during  night – a mixture of ozone, the scrub of the dunes, and a freshness, which melts under the warmth of the sun. The silence, as the first light seeps along the horizon, is vast and exquisite. It surrounds you as the landscape stands on tiptoe, waiting for the new day’ s first sounds, and you hope it be the cry of a bird, or the whispering of ocean to earth,  and not the ugly sounds of men.

It has to have been an awfully good drop of wine which has made me sleep in and not want to get down to the beach.

I am ridiculously happy with this photo, because it’s taken me 3 years to achieve it!  I knew that sooner or later the sun would be rising in line with this pathway down to Playa Cabezo. I’ve taken snaps here before, but never managed to get it quite so framed as this morning. I must have taken about a dozen, but this is also the only one where that wave is trickling in just that way.

Aging with passion; travelling with curiosity; exploring islandlife, and trying to keep fit and healthy.